When I was growing up in the  50's, we recycled.  We didn't call it that, but that is what it was.  We didn't have paper towels, we had kitchen towels from old flour sacks. We dusted with old cloth diapers.  Clothes were handed down from one child to the next and  when they reached the last child, if there was any life left in the shirts and dresses and pants and skirts, they were given to another family.  If they weren't wearable, they went into the rag bin where they were either cut into strips to tie on the orange tree (apparently my mom thought birds were frightened by worn out T-shirts) or used when my dad washed our car.  When someone moved into a new house, you didn't go out and buy them a dust collecting crystal vase.  You went thru your pantry for food stuffs, your closets for linens and your garden for flowers.  Just because you wore out the knees of your jeans, didn't mean you got new ones.  You got your old ones patched.  If you are my age or older, you have at least one photo of yourself in jeans with huge rectangular patches 5 shades darker covering the knees.  My mom ironed them on even before the knees were shredded.  Don't even get me started on all the things we used old newspapers for.  We weren't the weird family on the block, everyone lived pretty much the same way, with dollar saving practices passed down from their parents.

As we moved into the 60's, my family stopped doing a lot of the ecnomical things that we had previously done.  There are dozens of reasons why that happened to not only us but the families around us, and an analysis of those reasons has filled shelves of books.  This blog is not about that.  It is about me, my one woman campaign to change the way I live.

Last Christmas for the first time in a long while, I made a lot of my gifts.  Vanilla infused vodka, home made Irish cream, vanilla sugar, home made sweet hot mustard.  Since I had not yet begun to reuse bottles and jars, I had to buy containers.  However, as I was filling up the bottles with the vodka, I was one bottle short.  It was Christmas Eve and World Market was closed.  What to do, what to do?  Then I remembered that only that morning I had finished off the last of the maple syrup and a great star shaped bottle was in the recycle bin.  I pulled it out, washed it up and filled it with vodka for my brother.  An Epiphany!  How much better would it be if all the gifts were in recycled bottles?  It was too late for these gifts, but I vowed then and there that next Christmas I would be prepared.  I now have a shelf in the garage filled with a rapidly growing collection of cool bottles and jars.  And not just to give as gifts.  My beads are in little glass jam jars.  My chains and clasps are in larger jars (hint: don't use old Ragu jars unless you don't mind the spaghetti smell).  There is a cute brown bottle that used to have vanilla extract in it sitting on my desk, filled with hand lotion that now has a nice vanilla-y fragrance.  I have 6 blue beer bottles just waiting for Spring flower cuttings (thank you Bud Light Platinum). 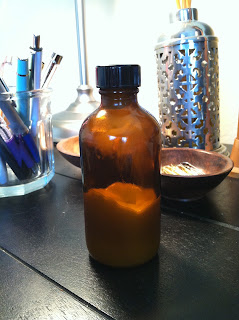 Yes, I know, these are little steps...tiny even.  But we all have to start somewhere and I am starting with bottles and jars.