Farewell to a house

Life is about change and heaven knows my life has seen change over the last two years.  I relocated to another state, started a business on Etsy, had my full time work hours cut to part time, lost my brother to cancer and am helping my mom with not one, but two moves.  Each event has brought its own set of challenges but one of the most difficult has been helping my mom sell her house.  Originally bought by my parents 32 years ago, this is not my childhood home.  It is, however, the home of my children.  This is the house that my mom and dad bought as a reward for working so hard all of their lives...the big house they bought after my brother and I had each married and started families of our own...the house they bought to enjoy their retirement.  Things didn't work out quite as planned.  8 years after they bought this house, which is twice the size of the one my brother and I had grown up in, my dad was diagnosed with cancer. A year later he passed away.  But during those 9 years my 2 kids and their 3 cousins put their enduring stamp on this house. One room became the toy room, filled with child sized furniture, huge boxes of toys, bookshelves filled with Dr Seuss and the Berenstain Bears, a TV with VCR where they watched the Wizard of Oz and DuckTales. One room was the strawberry room, named for the quilt on the double bed that all the kids piled onto when they spent the night. Christmas was celebrated in the big family room where the white flocked tree reached the vaulted ceiling and the presents formed a mountain that spread halfway out into the room. We hid Easter eggs in the big backyard, watched sunsets from the deck, barbecued on the patio, blew bubbles that floated down the hillside and had water gun fights that grandpa always won because he used the garden hose.  After my dad passed, my mom tried to hang on to the house, but it was just too big, too expensive and, I believe, too filled with memories.  So after 10 years of being more a caretaker than homeowner, she and my brother's family swapped residences.  They would live with their 3 children, now teenagers, in the 'big' house and she would live in the much smaller house down the hill. My brother and his family began to put their stamp on the house. They took down wallpaper, painted, recarpeted, put in a new patio and rebuilt the deck. They added raised garden beds and a water feature, planted a small citrus orchard.  The toy room, strawberry room and my dad's office became bedrooms, then, as their children grew up and away, a guest room, nursery for their first grandchild, and an office again.  They took their time, making changes that were important to them to a house they planned on retiring in.  13 years after the move, cancer claimed my brother. Once again, my mom and sister in law traded houses. For my mom, the move was never going to be a permanent one, the house was still too big, too empty, too expensive to maintain and frankly, had too much equity.  And so, after 32 years, she is selling the house.  No longer will this be the family home where we gather for Sunday night dinners. No longer the place where the women gossip and bake Christmas cookies. No more cousins will be married in the big backyard where my daughter and, one year later, my niece was married, or have their growth carefully measured and marked in ink on the inside of the hall closet door. We will no longer sit drinking wine as the setting sun turns Mount Baldy pink. I know it is time for my mom to move on...and she knows it, too.  It's long past time for her to settle into an adult community where they have brunch on Sunday mornings and bingo on Wednesday nights.  It's time to sort thru boxes, pare down possessions and step into the future. My head knows this. But as I sit here, wine in hand, watching Mount Baldy turn pink, my heart hears childish giggles echoing down the hall from the toy room. If I turn slowly, my heart can see my dad reaching into the kitchen cupboard by the stove to get a marshmallow for each of my daughter's tiny hands because who can possibly cry when holding marshmallows.  I find myself plagued with doubts.  Should I have tried harder to help my mom keep the house?  Should I have moved here permanently to share expenses so that she can live out her years here, where the memories lurk around every corner?  The only answer I have is that I didn't and I can't.  My life is no longer here in California, but in Texas where my daughter and son in law live, in Montana where my son and my friends are, in Seattle where my job is.  I love this house, but it is time to go.  My head knows this and my heart is coming to understand it as well.  There is room for another family to make their own memories here. I am taking mine with me...along with that closet door! 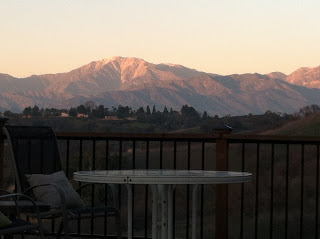