My dog is an early riser.  I have tried for years to convince him that 7:30 or even 7:00 is a perfectly acceptable time for him to do his morning business.  I have had limited success.  So it wasn't surprising, really, when this morning I heard him politely clearing his throat at 5:30am.  I rolled over and stared down at him, his front paws on the edge of the bed.  "You realize it is waaay too early to get up, don't you?" I ask him.  "Yes, Mummy, it is quite early, but I rather badly need to go outside," he replied.  I should mention here that my dog is unfailingly polite...he is, after all, an English Cocker Spaniel, and as such does not use American slang or contractions.  Early on my son thought he might possibly have a less refined accent, but my daughter pointed out that no one with a name like Ridgebury's Uptown Debonair could possible have a Cockney accent.  We have since learned she is correct.  "Fine!" I grumble as I get up, trudge into the bathroom to splash some water on my face, then to the door to done a sweatshirt, gloves and scarf.  As I open the door, I see it is raining.  I have to try again.  "We could, you know, wait until this eases off a bit before we walk".  "Hmmm," he says.  "Remember this summer when we were driving across the desert and it was unbearably hot?  You stopped so that we could walk about a bit.  And I suggested I could wait until it cooled down a little, perhaps around midnight.  And you said no, we have to stop now.  And I said, but Mummy, the pavement is terribly hot.  And you said..."   "Fine!" I grumble again, stepping out into the downpour.  In all fairness I should mention that it was actually just a fine mist but to my sleep deprived grumpy mind it had assumed the properties of a monsoon. I can tell right away that this will not be a short walk.  Not only does Colton not mind the rain (it's that British thing again) he is never one to just go out, find a bush and lift his leg.  No, no.  If one bush is good, then 30 must be wonderful. So we slowly make our way down the walkway to the sidewalk, heading toward a large patch of grass on the other side of the complex, stopping so that he can examine each bush, rock and several cars.  As we get close to the grass, I can hear a cacophony of birdsong exploding from the oak tree at the edge of the lawn.  It's amazingly loud and, I have to admit, really beautiful.  Added to the song is the call of one of the three huge crows sitting atop the fence surrounding the community trash bin, alerting other crows that breakfast is served.  As we amble across the lawn, I glance up to the slight rise on the other side of the fence and gazing back at me are 2 deer, being still as only deer can be. We look at each other for a bit, then one of them drops her head down to resume nibbling on the ample grass, while the other turns and faces me head on and gives a little snort, accompanied by a stamp of her front feet.  "Sorry!" I call to her. "Carry on."  I turn away to show her I am no threat and suddenly I see a flock of Canadian geese flying in formation off to my right.  I hear them now, their loud honking startling in the early morning.  I realize even the birds and the crows are silent as the geese wing their way overheard, changing direction several times, dipping and weaving their way thru unseen air currents.  My dog has stopped moving and I look down to see if he, too, is enjoying this early morning splendor only to find that he has come upon an abandoned Reese's Peanut Butter Cup wrapper and is eagerly sniffing over every inch of it in the hopes that there is a little candy left.  I find myself grinning in delight at the crows, the birds, the deer and the geese, and laugh out loud at the sheer absurdity of my dog and the candy wrapper that is now stuck to his nose.

He finishes his business and we walk back to the apartment...well, I walk, he trots a happy little jig, well pleased with how the morning has gone.  As I give him his Milk Bone for a job well done I say to him "Listen up, Bud.  Just because we went out early this morning, we are not, I repeat NOT going to make a habit of this.  There is no guarantee the birds and the deer and the geese will be there again and zero chance that the candy wrapper will still be on the ground!" He doesn't say anything, still happily munching his treat, but I think he rolls his eyes at me.  "Dumb dog," I mumble, reaching down to give him a quick rub on the top of his head and, since I am already bending over, a longer rub of his ears.  As I turn away to start the Keurig going for my morning caffeine fix, I swear I hear him chuckle. 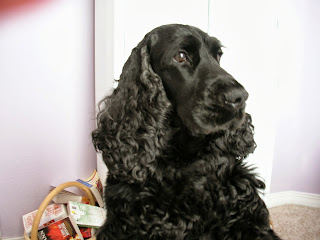