It's November...time for craft shows!

I love Fall craft shows!  From small ones held in church basements, to shows so big they are held in sport stadiums...I just love them all.  Today my friend, Marilyn, and I headed out to what was advertised as the largest craft show in Western Montana.  Held in the ballroom on the top floor of the student union at the University of Montana, it featured over 80 vendors, with items ranging from pottery to homemade jam to knitted scarves. I could have easily emptied my bank account, but am proud of the fact that I limited myself to just a couple of purchases.  I am ashamed to say that at no point during the show did buying Christmas gifts for anyone else even enter my mind.  Nope, it was all about me. My favorite purchase is the pair of mittens pictured below.  Assembled from at least 4 repurposed sweaters and lined with fleece, these will certainly warm my hands on long chilly walks...the fact that they will also make me smile is just icing on my Christmas cookie.

Today's jaunt made me think of the ghosts of craft shows past...beginning when my daughter was just a baby.  In Southern California, virtually year-round sunshine means most craft shows are held outdoors, many of them in abandoned drive-in movie theaters...which, when you think about it, is the ultimate in repurposing!  I would bundle Jenn into her stroller and, fortified with homemade strudel purchased from a lovely German couple, would wander the aisles for hours, admiring the variety of goods available and, since money was short, memorizing the crafts in the hopes of replicating them at my own craft table at home.  Many a Christmas gift was based on those crafts I admired but could not afford at the Orange County Fairgrounds.

The largest show I have ever attended was at the Tacoma Dome, an indoor sports arena.  My adult daughter (a craft show veteran herself by this time) and I went each year we lived in Washington.  A mix of both handmade and imported items, the show filled two huge rooms generally reserved for basketball games and was so large they had an entire wall of food vendors and a stage populated by local choirs and bell ringers.  My favorite item from the Tacoma Dome years is a gorgeous cut linen cloth imported from Austria, about 18 inches in diameter, shaped like a star and heavily embroidered with gold poinsettias.  I bought my mom one at the same time, embroidered with red poinsettias...she re-gifted it.  Word to the wise: not everyone loves crafts shows or their merchandise.

The most beautiful craft bazaar I attended was in a fabulously decorated, 4 story Victorian mansion in Kalispell, where local singers, dressed in vintage Dickens costume, caroled in the chilly Montana air.  We were snug inside, enjoying hot chocolate and Christmas cookies while we shopped for delicately tatted doilies so airy you would swear they were fashioned by fairies and wooden toys, looking to be straight from Santa's workshop.

The smallest show I can remember was in the cafeteria of a local high school, and was advertised as having something for everyone.  The parking lot was full as my friend and I pulled up and we were eager to get inside, hoping the abundance of cars meant an equal abundance of remarkable crafts. We entered through a door, followed the signs up the stairs and down several halls to find a handful of tables haphazardly spaced out along the walls of an enormous room.  We could have played indoor soccer in the middle of that space and not endangered a single display. When we made our way back out of the maze of corridors to the still full lot, we realized the cars belonged to the students who were taking their SATs in the auditorium!

Today's show was my first since returning to Montana but it certainly won't be my last.  I am, after all, a craft show addict and will attend them until I can no longer walk on my own.  After that, you'll find me shuffling along, wielding my cane like a saber as I cut in front of those who might be younger but cannot possibly be as determined as I to reach that display of handcrafted tea cozies. 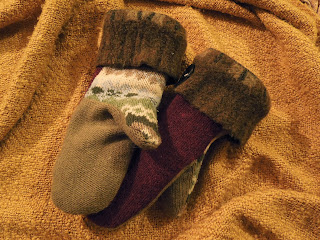