Real tree vs one from a box

I am dithering, going back and forth over getting a real tree for the first time in at least 10 years and getting another boxed one.  I bought an artificial tree the 2nd year I lived in Texas after an awful experience with drooping limbs and dropping needles the year before.  It (the fake tree) was lovely!  Tall, full and gorgeously green, its limbs were sturdy enough to take on all of my glass and metal ornaments, some of which are fairly heavy.  It survived a move to Montana and a move to California, but it disappeared under suspicious circumstances from a moving van on its way to my current home.  I believe it is living happily in someone else's living room along with my umbrella stand and a wicker hamper I had bought over 40 years ago (into which I had packed my two favorite purses!), both of which also mysteriously did not make the final trip.

I have early memories of my dad cutting a tree for us when we lived in Montana, not at an approved tree farm, but just some random field outside of town.  My brother and I never got to go with him to help choose it, my dad would just go out and come back later with one tied to the top of our station wagon.  No doubt not having kids with him made it easier for him to move quickly should someone object to him wielding an axe on their property.  When we moved to Southern California, we left fresh pine behind in favor of an aluminum tree.  I remember my mother unpacking it when she got back from the store...setting up the stand, sliding the tubes off the branches, assembling the tree. That year marked the end of homemade ornaments, tinsel and candy canes on the tree.  Instead we had round glass balls, all one color, and a huge sparkling star for the top. Instead of strings of colored bulbs, we had a light with a revolving disc of colored plates that, when pointed at the tree, turned the whole thing red or orange or green.  I laughed out loud recently to see the same tree and light display, now considered vintage, on Etsy for over $300!

In the late 70's, my husband, daughter and I lived in Oklahoma.  The first year we were there, as a fairly poor Air Force family, we waited until Christmas Eve and bought a tree for $1.50 from the local hardware store.  It was actually only half a tree, being flat on one side, but it fit nicely up against the wall! The next year we bought a $1 permit to cut a tree from the bison range about an hour's drive from the Air Force town of Altus.  Off we went with a hatchet and rope, ready to find the absolute best tree.  We traipsed thru the field, hopping over huge bison "field apples" looking for the perfect tree only to spy one in the distance that looked even better.  Finally, after a couple of hours of hopping and traipsing, we found a gem of a tree and set about cutting it for transport.  Now you would have thought that two intelligent adults would have realized that the fact that it was taking us a really, really long time to cut it down, might have been a clue that the tree was a little larger than what would fit in our duplex. You also would have thought that those same two adults would have taken a look at the way it fit on the top of the car, or rather didn't fit, easily dwarfing it, and realized that it was a little bigger than what we needed.  You would have been wrong.  It wasn't until we had driven all the way home, unleashed it from the car and tried to cram it through the doorway that we realized this thing is HUGE!  We were so tired and covered with sap by the time we had finished wrestling with it, that we threw it in the backyard in disgust.  The next day I cut the top 1/2 off and had a nice 5 ft tree and enough pine boughs to decorate a ballroom.

So a fake tree from a box or a real, live, gorgeous, fragrant tree that my friends have generously offered to cut for me?  So long as they don't have to hop a fence or traipse thru bison land to get it, I am thinking the real thing! 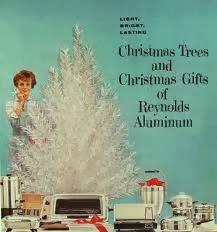 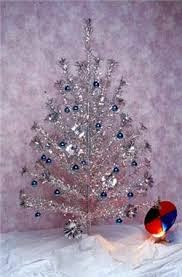