When I was a little girl I loved dolls.  Small dolls, large dolls, dolls that walked along as you held their hand, dolls that talked when you pulled a string, dolls that just sat there and didn't do much of anything. Dolls you could dress up in adult looking clothes, dolls you could wash the hair of without it falling out and some whose hair did not survive, dolls that looked like brides or princesses or ragamuffins,  I just loved them all....with one exception...Thumbelina.  Even typing the name gives me a small shiver.

It was Christmas 1960 and my mom was looking to feed my doll habit.  We went to the grocery store first to view those on-top-of-the-shelf dolls in their open, plastic covered boxes that showcased the doll in front of a cardboard scene.  We never bought any of those dolls because, as my mom said, who on earth buys a doll at the grocery store and expects it to last, but we loved to look at them.  Then on to the department stores, which at that time all had toy departments, not to mention fabric departments, book departments and candy counters. There the dolls were out of their boxes, set on little chairs or lying in cribs, or propped up against other dolls or stuffed animals. My mom would make up stories about the dolls, describing what this one or that one liked to eat, what TV shows they liked to see and the kind of music they liked to sing. Many a doll was in my collection because my mom had convinced me that it needed someone to love it, and I was just the girl to do that. A lot of little girls have dolls that sit on shelves looking pretty, as pristine as the day they were purchased.  Not so in my world.  When I say I loved my dolls to pieces, I mean that literally.

That Christmas I was newly turned 8, still doll crazy, and as we stood in the toy department, gazing  over the abundance of dolls, contemplating which one would be under the tree Christmas morning, my mom spied Thumbelina.  She was 20" of evilness, with rubber head, arms and legs and a stuffed body that hid the heart of her evilness...a motor that could be activated by twisting a big pink wooden knob on her back. My mom immediately twisted that knob and the doll's head began to move!  Mom put her down on the table on her side and the movement of the motor within her evil heart, forced her to turn over on her back.  OMG!!! I stared in horror at the doll and grabbed the first doll within reach, a fairly benign looking babydoll that did nothing more threatening than bleat a pitiful Wah! when you squeezed her.  "I like this one!" I said.  My mom glanced at it, then gave the pink knob another crank.  "How about this one?" I entreated, picking up a Betsy Wetsy, thrusting it in my mom's face.  She didn't even bother to glance at poor little Betsy or any of the other ones I held up for her.  As we left the toy department, I knew, I just KNEW that doll would be under the tree.

Two weeks later.  Christmas was a blur of brightly colored wrapping paper, ribbon and candy.  My brother and I dove into the gifts Santa had left like we had never seen toys before.  And yes, there at the center of the gifts was IT, Thumbelina, the baby doll who looked so placid laying there, pretending to be a doll...a doll who moved and turned over with a weird groaning sound from deep within her chest.  My brother was fascinated by it and kept turning the pink knob to see her move her head, until my mother admonished "Don't do that, you'll break her!"  Yes, I thought, turn that knob, turn it some more!  That night I was safely snuggled in my bed, a big stuffed dog cuddled next to me, when my mom opened the door.  You know that scene in a movie where the room is dark and then the door opens, spilling light into the room in an eerie pattern, while the evil creature stands silhouetted and creepy music crescendos? It was like that, except it was my mom and there wasn't any music.  She kissed me goodnight and laid Thumbelina on my dresser, turned out the light and shut the door.  I lay still as a stone, barely daring to breathe, when suddenly I heard IT...that awful groaning from within its chest followed by the thud of its arms and legs as it rolled over.  I jumped up, grabbed the doll, turned it over and cranked the heck out of that pink wooden knob.  I turned it until it couldn't turn any more then turned it again until I heard a satisfying PING!  I laid it down, got back into bed and went to sleep.

The next morning my mom was saddened to see that the doll moved no more, disappointed by the quality of the workmanship and suggested we take it back to the store.  Thankfully my dad had already cut the box up for the trash can and no doubt the receipt along with it.  So I was stuck with a doll that didn't move...that just laid there, pleasantly, quietly.  Sigh.

Fast forward to my daughter at age 4.  On a visit to my mom's house, she discovered the forgotten doll packed away in a box of Barbies. She immediately seized it, hugging it to herself, kissing its plump little cheeks.  She didn't care that it didn't move. She just thought it looked like a babydoll that was soft and cuddly.  She didn't even mind that it had a strange lump in its chest and decided it had an artificial heart, although where she had heard that phrase I have no clue. A couple of weeks later, I found the doll on her bedroom floor and noticed that the cloth on its tummy had a tear where the original workings were starting to poke out.  Thinking I would sew it up before my daughter got injured, I picked it up and stashed it on a shelf in the linen closet, and promptly forgot about it.  About a month later, my daughter came running down the hall..."Mommy, Mommy!" she cried.  "Come quick and see.  Someone killed Thumbelina!"  I ran with her to the closet and there on the shelf lay the doll, a long metal rod sticking up from its chest, looking as though someone had, indeed, killed it.  "Who murdered Thumbelina?" asked my daughter.  Oh, honey, I thought, if you only knew. 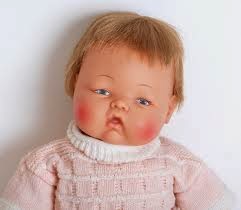 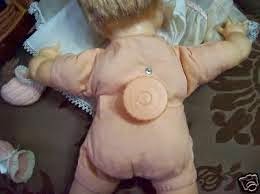