Last Saturday I decided to make pancakes for breakfast.  This is not a normal thing for me, being more the toast and coffee or go out and let someone else cook for me type. Since there is now only one of me it hardly seems worth the mess. But that morning pancakes sounded like just the thing, so I assembled all the ingredients and set about recreating some memories.  Pancakes always remind me of my mom and dad.  Mom is the first to admit that she is not a great cook and these days hasn't met a Lean Cuisine she didn't like.  But while dinners were hit or miss, she and my dad had breakfast down pat.  When my brother and I were growing up, Saturday breakfasts were always deliciously large.  Sometimes there would be make bacon, eggs and homemade biscuits, sometimes fried doughnuts or biscuits and gravy, but mostly there were pancakes.  Stacks and stacks of pancakes.  I never appreciated the time and energy it took to produce those lovely golden brown, perfectly sized cakes until attempting to recreate them as a new mom, nor did I fully comprehend the timing involved so that everyone got to eat at the same time and the cook wasn't left standing alone at the griddle. My first attempts yielded lopsided, lumpy and unevenly browned cakes that mostly tasted like uncooked batter.  When my kids got older the only pancakes they requested for breakfast were the ones my dad made for them...silver dollar pancakes barely larger than bite sized, Mickey Mouse pancakes with chocolate chips for eyes, and extremely thin, almost crepe-like pancakes that he wrapped around link sausage and let them dip in warmed maple syrup and eat with their fingers. It should come as no surprise that I did not feel compelled to master the art of the pancake, because who could compete with that! When we moved to Montana and the kids no longer had access to Grandpa's Wonder Cakes, they had to make do with what I produced, which had gotten noticeably better over the years, or settle for French toast. We had French toast, which I have found to be virtually impossible to mess up, a lot.


Single status not withstanding, Saturday saw me making pancakes, and not just ok pancakes but really, really good pancakes. I thought it was a shame there was no one to admire the pretty little cakes as they sat on my plate, gorgeously golden from the farm fresh eggs supplied by my friend Marilyn, dripping butter and real Vermont maple syrup. But on the other hand, there was no one to grab the first one off the stack and cram it into their mouth while my back was turned. I couldn't resist taking a picture and sending it to my daughter in Texas. She texted back that they had just finished their breakfast, which also was pancakes, albeit it with eggs and hashbrowns. She always was an overachiever.  I then texted the photo to my mom in California who quickly responded that she was on her way to a breakfast meeting and would talk to me later. Sigh! Apparently there was no one but me who was truly appreciative of my pancakes. Then I caught sight of my dog, patiently sitting by my knee, eyes glued to my fork as it lifted from the plate to my mouth then back to the plate again. Every once in awhile he would raise his eyes to mine as if to judge if I was going to be at all inclined to let him finish whatever it was on the plate that smelled soooo good. So I made him his own pancake and even drizzled a little maple syrup on it.  He ate it in one gulp then licked the empty plate for a good 5 minutes.  A little while later my son dropped by, took one sniff and said "Pancakes"?  "Yes, indeed," I replied. "There is still some batter, do you want me to make you some?"  "That's ok," he answered. "I'll make my own." And so he did, which I dutifully admired as, I'll admit it, at least as nice as the ones I had made, and maybe even better.  Of course he had to go one step further and add chopped up sausage, eschewing syrup in favor of heated up raspberry preserves, and dusting the whole thing with powdered sugar.  Show off. 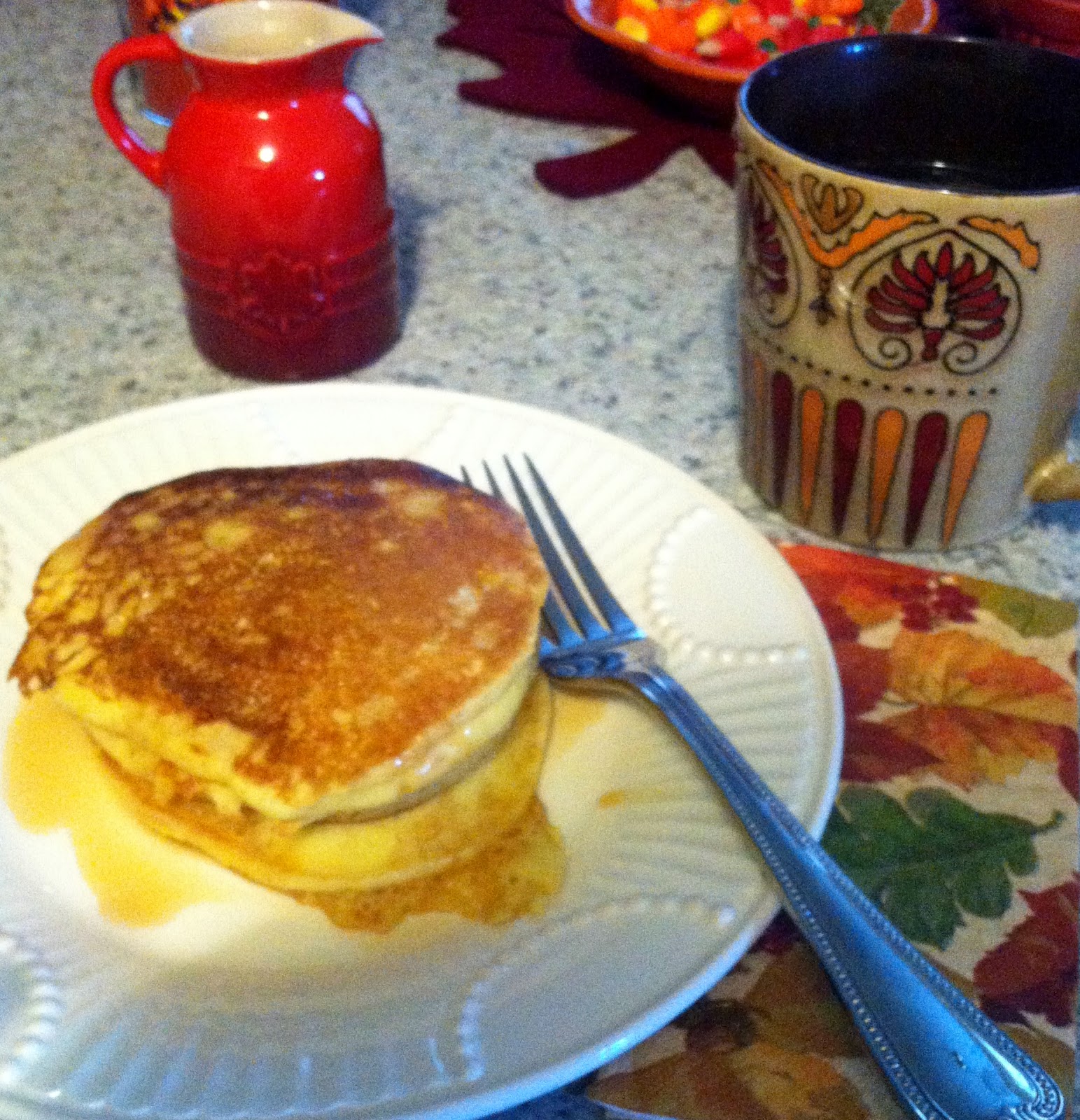