My days are not perfect, but perfection can be so boring

I turned 62 today and while that is not a typical benchmark year, I feel that at my age, every birthday is cause for a little hoopla. In 1929, the year my mother was born, life expectancy for women was 58.  By my birth year,1952, it had risen to 71.  Today it stands at 79.5, although apparently if I were living in Monaco I could expect to live until at least 89.  Must be all that French wine. On the other hand, if I lived in Tansania, I would have already reached my expiry date.  My mom is now 85 and shows no sign of slowing down, so I'm thinking that bodes well for me, but you never know.  In fact none of us, no matter how old we are, ever knows what the future will bring or how many more years we will have on this earth. All we can do is enjoy each day as it comes, realizing that each day may not be perfect but each day can be pretty good.

My birthday started at 5:45 with my dog begging to go for a walk, which is way too early to be happy about it any day that happens let alone on your birthday. I went out the back door to the grassy area that the apartments are built around. It was dark so I had to use a flashlight to make sure I didn't step in stuff I didn't want to step in.  When we set off, there were no lights on in any other apartments, but there were lots on by the time we were finished. I try to be quiet on these early morning treks, but dogs apparently love to bark at other dogs as they do their business. I think we woke up every dog in the complex, who in turn woke up their humans, who were not happy if the frequently voiced "HUSH" was any example. It rained late last night, then dropped below freezing in the wee hours, leaving the sidewalks slick as, well, ice. I was in the mood for a birthday scone so after feeding my dog, I headed out the front door on my way to my beloved Starbucks, and quickly realized that no one had availed themselves of the ice melt that management supplies us with, despite the fact that all 3 of my closest neighbors had left before me. Maybe instead of being rude they just have better balance than I do. I sprinkled the crystals all the way to my car, then stepped off the curb and almost went down. 10 minutes later, after scraping the windshield and letting the interior thaw, I drove to the gas station, stopped the car and popped the little latch for my gas tank cover, only to find that it had frozen shut. I imagine I looked a little ridiculous jumping in the front seat to jiggle the latch, then running around to the other side to see if the door popped open, smacking it to loosen it up, then back to the front seat to jiggle the latch again.  As I repeated those actions 10 or 11 times, I amused myself by thinking of someone watching a video feed and seeing my odd choreography.  Just in case that actually was happening, I made sure to send the camera a big cheesy grin and flashed a little V for victory. By the time I pulled out of the gas station I was once again shivering in the cold. But it was all worth it as the cheerful person at the Starbucks drive thru handed me that steaming cup of deliciousness and that lovely little bag of yumminess. Coffee and scones make everything better, even a cold day that started at 5:45.

My point is this.  No day is perfect. Not today or yesterday or last Tuesday. If the future held only perfection, I'm thinking it would be a little boring.  The best you can do is try to balance the irritating, the absurd, the heartache with the empowering, the silly, the joyful.  I have a tattered and very loved Eddie Bauer sweatshirt that has Balance embroidered across the front. A gift from my daughter, it's no longer fit to be seen in public, but 20 years ago I wore it a lot.  People never failed to comment on it. "Ah, yes, Balance!" they would murmur. "That's the key, isn't it?" I was telling my daughter one day about my sweatshirt apparently inspiring insight and deep thinking and she said "You realize, don't you, and that you haven't been an advertisement for yin and yang so much as a walking ad for their new men's fragrance, Balance?" Somehow knowing that made wearing it even better.  Balance, you know? 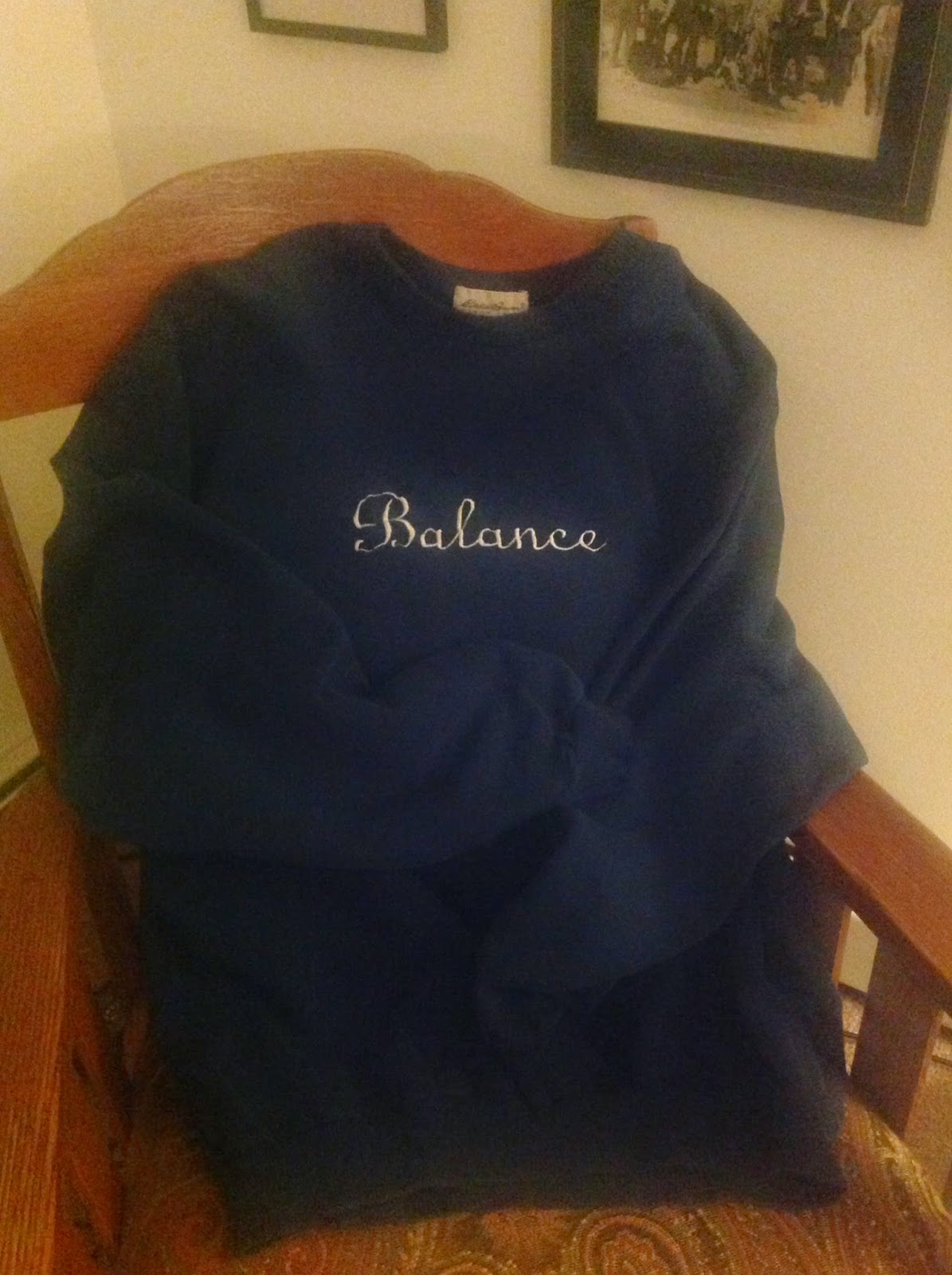 "I ain't here for a long time, I'm here for a good time. So bring on the sunshine to hell with the red wine, pour me some moonshine!" George Strait