Anyone who has lived in snowy/icy areas knows that falling is a fact of life.  No matter how careful you are, eventually you will fall.  I have been pretty lucky in that regard.  Over the many years of living in Montana I have only fallen a handful of times, and have never really hurt anything other than my pride, but because I have only a few falls to my credit, I vividly recall each and every one of them.  The most startling one was right on my front porch.  I had just moved in to a townhouse and it was extremely cold late one night when my sweet but elderly springer spaniel, Cricket, needed out one last time. I let her out the front door, closing it quickly to keep the cold out and the warmth in, but when I opened it again, she was gone.  I leaned out to see where she might be, only to find her on the next porch over looking up at the door no doubt wondering why it was shut.  I took a step out onto the porch and, since she was deaf, waved my arm at her.  She continued to stare up hopefully at the other doorknob, waiting for it to turn.  Finally I stepped out to the edge of the porch to catch her eye and bam! down I sat onto the first step.  Happy to see me, my dog trotted over, gave me doggie kisses, then, since apparently I was not going anywhere, sat down on the porch by me and looked around. If she wondered why we were sitting in the freezing cold on the icy porch, she never said anything...just continued to sit by me and stare out at the night.  Until recently, that was my worst fall...as I said nothing really damaged except my pride and my dog promised she'd never tell.

So it came as a huge surprise when a couple of weeks ago I fell while walking my dog in the early hours of the morning.  Striding along with him as he trotted, happy as only a dog can be to be out in the just barely dawn light, I hit the one patch of ice on the otherwise dry sidewalk and went down mid-stride on one knee, the other leg stretched out before me. Well, I thought, I've never done that before! As I dragged myself upright I was surprised at how much falling on my knee hurt. As a result of the fall, I had two big scrapes on my knee, which over the next few days became two big scabby areas. Which made me think...when was the last time I had scabby knees?  Certainly not as an adult, or even a teenager, but as a child...oh yes, there were plenty of scabs.

I was born in 1952 and by the time 1960 came around I had more scabs on my knees than I can recall. In fact, it wasn't unusual for me to have fresh scabs over almost-falling-off ones. Anyone who also grew up in that time knows immediately what they were from...roller skating!  We kids of the 50s were skating fiends! We wore white and black or all white saddle shoes that had a nice thick ridge around the sole so that our skates could clamp on nice and tight. We wore our skate key around our necks on a string so that after we skated over to our friend's house we could remove the skates...although I had one friend whose mom actually let us skate thru the house!  On her hardwood floors!! We skated everywhere...to friend's houses, to the neighborhood store, to the park...everywhere we went, we went on skates. And we didn't confine ourselves to the sidewalks.  Oh, no, we skated right down the middle of the blacktopped streets.  Sometimes we would get pulled along the street by someone riding a bike as we held onto a rope tied to the seat post, laughing hysterically at the speed.  Every so often my mom would let me keep my skates on while she ran errands.  She would park the car far away from the entrance so that I could skate around the car while she would run into the bank or the dry cleaners. Up until I was about 11, we lived a couple of blocks from a junior high school, which we would head to whenever we could to skate on the nice, flat concrete walkways. And yes, just like skateboarders later on, we were routinely chased away by the janitors.

Yes, we skated everywhere....and we fell...a lot! We girls never wore jeans, only shorts or our school dresses (if our moms didn't catch us first and make us change). I can vividly remember sneaking into the house to try to put a bandaid on a freshly scraped knee before my mom could hear me and grab the Mercurochrome. I really, really hated having my knees painted red! By the way, that red colored antiseptic is no longer sold in the US due to its mercury content!! Yikes! The boys wore jeans so while they fell just as often, their knees took much less of a beating. The knees of their jeans, however, tore often, which our moms fixed by ironing on big denim patches. My mom ironed patches on my brother's jeans before he ever wore them, so his patches were always the same color as the jeans themselves. She was clever that way.

So, I am familiar with scabby knees. But what I found out over the last couple of weeks is that falling and banging up your knees as a kid in no way feels the same when you do it as an adult.  I am quite sure that if these scrapes and subsequent scabs were as painful when I was younger, I would have immediately turned in my skate key.  Of course as my son pointed out, there is a lot more force behind a fall of mine these days and I am lucky I didn't break a kneecap. He's helpful that way. 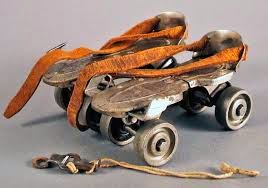 These aren't my skates, but they could be, right down to the dirty used-to-be-white string on the skate key. My skates were taken apart and used to build a truly unmanageable skate board...but that's a different story.