Change is inevitable...is that a good thing?

Change happens.  All the time. The weather, the landscape, your children's ages. Everything changes. As I write this I am eating a bowl of homemade cauliflower soup (and can I just say YUM!) which in a minute or so will be gone. Change. Anyone who says they don't like change is being disingenuous.  If they really didn't like change they would sit in the same chair, wearing the same clothes, day in, day out until someone either hosed them off or set them out on the curb for the no doubt underpaid garbage truck people to pick up. Oh well, they say, some change is ok. It's the big changes I don't like. Like what? You don't like summer turning into fall into winter into spring? You don't like the revolution of the earth? Don't like to see the sun come up every morning? Well, that's just silly! Of course that kind of change is ok. So what kind of change is not ok? I am going to go out on a limb here and say that the kind of change we don't like is a change we don't want.

I had breakfast with a good friend this morning and as I drove home I made a detour around town, realizing that this will be one of the last times I do that. Not the last, but one of the last. Change is all over Missoula. In the 20+ years I have lived here I have seen houses march along the hillside where empty lots used to sit. I have seen the city spread out to include dozens of businesses along a 4 lane road that runs the length of town, river to mountain. New buildings at the University. Different shops downtown. New restaurants, coffee shops and golf courses. When I first moved here, locals were always giving directions by saying what the location used to be, like the old JC Penney store, the even older Safeway on Higgins, the now abandoned drive in, the old Mansion (the original location up the Rattlesnake, not the new one on the hill). Now I can give my own directions with what-used-to-be-there's. Like where Insty Prints where I briefly worked was, or Hansen's Ice Cream Parlour where you could get a great hamburger as well as a killer hot fudge sundae, Montana Pies as well known for its soup as its pies.  The shopping mall has its own stories of change. WaldenBooks, Grady's Cafe, El Matador with its food barely recognizable as Mexican, a coffee shop done in forest green and white that had the best coffee I ever had, Nordstrom Annex that only sold women's clothing, and a host of local businesses that did not survive mall rent.

Some of the changes to my city were welcome (can't wait to shop there), some barely noted (hey, where did that come from?), others mourned (I loved that place. No, I didn't go much, but still). As I consider the move that is in my near future, I can't help but wonder what will be changed when I return. This won't be a temporary move as some of my others were. This is a move toward a future I can almost see and that I am excited about embracing. I will return to this much loved city, to sit on decks and drink wine, to camp by gorgeous rivers, to celebrate milestones both mine and others, both happy and sad. I will return but I doubt I will ever live here again.

A friend drove me home late one night last week and as we went past one of the several brand new apartment complexes springing up in the most unlikely places, I wondered out loud where all the people who were moving in lived before they were built.  To which my friend replied, at least there will be lots of choices when you move back. He's a funny guy. 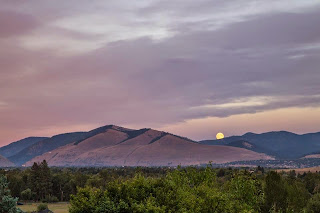