It's like Romeo and Juliet without the dead teenagers

One of the best things about visiting my mom in Southern California, is listening to stories of her life growing up in Illinois in the 30s and 40s. Some of her stories are hilariously funny, some unbearably sad, all are fascinating. She was the 4th of 7 children and from some of the shenanigans they pulled it is amazing that her mom survived their growing up!  But my grandmother was apparently made of sterner stuff than I can imagine. Smart, strong and determined to give her children the best life she could. Yesterday my mom showed me some memories she had written down. In the reams (and reams) of paper, I found the story of how my spine-of-steel grandmother started her life with the very clever man of her dreams, my grandfather.  Here, in my mom's own words, is the story of them.

Both of my grandparents lived just south of Louisville, Kentucky, on adjoining farms. The two men who would become my grandfathers had a running feud for many years with neither family allowed to associate with the other.  Of course this made the two children, my mother and father, each want to be with the other even more.  Mother left high school at 16 to attend boarding school, then one year of college. Her parents had great plans for her as many of her family members were doctors, lawyers, school teachers.  What their parents didn't know was that several love letters passed between her and the young man she was smitten with whose daddy worked the neighboring farm. My Dad was 18 and Mother almost so when they tried to elope. Her father sent the sheriff after them who took Mother back home. A few months later the church was having a revival meeting, which my mother and her family were attending, and Dad had prearranged to have 4 buggies with one couple in each buggy meet at a fork in the road outside of town.  Dad rode his horse up to the church window and Mother jumped out the window onto the horse and away they went. At the fork in the road the two young lovers got into one buggy and headed for the Tennessee border, while the other 3 buggies each took other roads.  When the Sheriff's posse got to the fork in the road, they had to choose which buggies to follow...they chose the wrong ones.  The eloping couple got to the river crossing but the bridge had been washed out the week before in a heavy rain. They waded across the river into Tennessee where they were met by Dad's cousin who had a Justice of the Peace ready and waiting to marry them. When they returned home, naively hoping their families would welcome them with open arms, my mother's family informed them that they were dead to them, but my father's family was delighted.  Of course that might have been because there was money on my mother's side and none on my father's.  Years later my mom reconciled with her family, but she never quite forgave them.

To be honest, I am not sure exactly how factual this story is.  I found in the same reams of paper a version of their elopement that had my grandmother jumping out of her 2nd story bedroom and in another the buggies were Model Ts.  I personally like the image of the buggies better and really the details aren't the story, the emotions and feelings behind it are.  It must have been so hard for my grandmother, at not-quite-18, to be told never to darken her family's door again and doubly hard when a few years later the Great Depression hit, driving them and thousands of others to relocate in hopes of making a better life for themselves.  They were a hardy lot, those ancestors of the early 1900s.  I'd like to think I would have had the courage to take a literal leap of faith out a window, whether it be the 2nd story bedroom or church, into the arms of my horseback riding beloved, but who knows?  I may have taken one look at the horse I was aiming for and decided I would rather take a nap. Fortunately for me, my grandmother made that leap.

Here is my grandmother in 1941 with 5 of her children.  The other two late-in-life babies had not yet made their appearances.  My mom is in the front in a home-sewn satin dress.  She said she would like to say it was red, but she remembers it was navy blue. She also remembers that just moments after she was keeping an eye on him in this photo, her younger brother pulled his hands out of his pockets, and yes, he had a frog in one.  So of course she punched him. 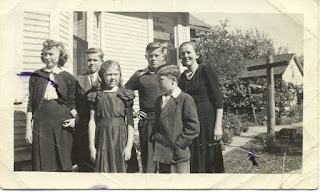