It's been over a month since my little buddy, Colton, left me and I still miss the heck out of him.  He was almost 15 years old but, with little gray on his chin, still looked like he was in his prime.  Looks can be deceiving. Inside, he was riddled with the effects of old age...a wonky heart, a rapidly growing tumor that might have been cancer, slowly decreasing eye sight, complete deafness and, saddest of all, a little touch of senility.  I had never had a dog that lived to be that old, so I completely missed the first signs of his frailty, and only realized he was losing ground when he became increasingly confused by the world around him.

Colton and I went thru so much together.  Road trips, he was good at those. All I had to do was get out my suitcase and he was ready.  I'd load up the car, throw some quilts and pillows in the back seat and he'd curl up and sleep until we stopped at a rest stop where he would run around on the grass, do his business, get a drink of water and a treat, then hop back into the car for another nap. When we stopped for the night I always got a room with two beds so he could stretch out on one of his own. He hated thunderstorms. When I lived in Austin, thunderstorm central, I'd make a nest for both of us in my walk in closet, close the door and read while he slept the noise and flash away.  He and I moved 6 times and he couldn't wait to run around the new neighborhoods, sniffing and snuffling enthusiastically, looking up at me as if to say "Dogs are here, Mom! Dogs, dogs, dogs!".  He loved to get into small spaces, under low tables, in corners, behind chairs.  I once accidentally shut him in the linen closet where he had curled up to take a nap. He loved long walks even in the snow and rain, especially in the snow and rain. He'd hop over puddles because, you know, wet feet, but bury his head in snow banks. He waited politely while I ate, because he knew I saved the last bite for him.  He was a great plate licker.  My dishwasher never had to work hard to clean up after him. He loved to lay on a rug at the edge of my kitchen while I cooked. Anything I dropped he would dash in and grab, like the kids at tennis matches who retrieve the balls.  He could stand on his hind legs for the longest time, often doing so to get a look inside a drawer I might have opened.  One evening I heard a noise in the kitchen and found him standing up on his hind legs gazing down into the trash can, which he had somehow managed to open by pressing the foot bar. To this day I don't know if he opened it by accident or on purpose.

Because I worked at home, we were rarely apart.  And after so many lovely years with him, I still find myself saving that last bite, not bothering to pick up a dropped piece of food because surely he will be there to grab it, making sure food is back far enough on the counter so he can't stand on his back legs and snatch it. Even though he lived a good, long life...it just wasn't quite long enough.

Here are some of my favorite pictures of my friend. 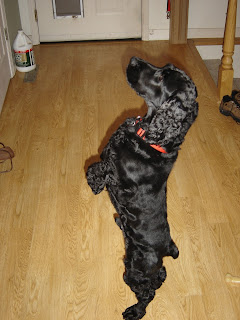 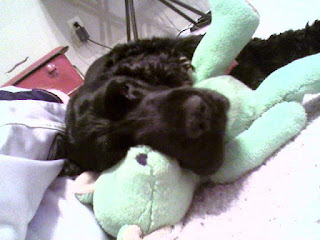 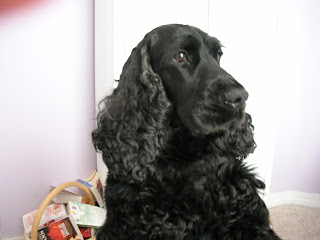