Is this the last move for me?

I move around a lot. My friends shake their heads at my gypsy ways and my children think I am nuts, but in the past 5 years I have moved 4 times, and if you count back to 1988 add 10 more. I have promised them this is the last stop for me, but the jury is out on whether or not they believe me.  This feels like a final state to state move, but perhaps not a final in city move. I am hoping at some point in the not too distant future to buy a house, but that remains to be seen. For the moment I am in a great apartment with a really functional floorplan and a terrific view.

There have been moves when I have hired moving companies, and ones when I have rented UHauls and done it myself. The professional moves have their own quirks and oddities, but you can't beat a do it yourself move for laughs.

At some point my ex had acquired some large, round cardboard barrels with metal lids that fastened with clamps. They originally had rice in them and were virtually indestructible. Once packed, they are also virtually impossible to pick up without a forklift. Each time I tried to move one with a dolly, it somehow managed to roll right off. At one point one rolled down the driveway and had started down the street before the kids chased it down and rolled it back. Due to their indestructability, it seemed a good idea to pack more fragile items in them, and I have to admit there wasn't any breakage when I unpacked. The problem was I couldn't reach the bottom half of the barrels and had to tip them over and practically crawl inside to unpack them. After that move I declined to be involved with any barrels, indestructible or otherwise.

Another diy move involved 3 bikes standing upright, secured by a complicated system of bungie cords and rope to a homemade trailer, pulled by our station wagon driven by me. Things were going swimmingly until too many curves in the winding road had them all listing to the side. I pulled over to assess the situation, wondering if I could make it to our new house or if I should try to shove them upright on the trailer, at which point they slid gently and rather gracefully to the side of the road.  As I stared at the tangled pile of bikes and cords and rope on the ground, I glanced at the car to see my sleeping children and wondered fleetingly if anyone would miss them if I chucked them over the side of the mountain...the bikes, not the children. My 7 year old son took that moment to pop up from the back of the car and enthusiastically offer to ride on the trailer and hold onto them. I thanked him for his offer but managed to load them back onto the trailer, although I refused to stand them up, and strapped them all back on. This was the same trip that's become known as the time I almost left my son at a gas station. Not intentionally, of course, but still. After I filled up the tank, I started the car and began to pull away when my 10 year old daughter looked into the backseat and asked where her brother was. Slamming on the breaks, I leaned over the back of the seat and threw the covers and pillows around, because I apparently thought he was the size of a hamster. I ran into the gas station and asked the gal behind the counter if she had seen a little redheaded boy come thru.  She pointed to the attached bar and there was my little guy, kneeling on a barstool, asking the bartender if he could have an orange soda.

A memorable move involved me, an enormous drive it yourself truck and my best pal, Marilyn. I was a little short of cash, so elected to rent the biggest truck the company had, hire a couple of guys to pack it up, then road trip to California. Marilyn had planned on visiting her family and they were close to where I was going, so we set off, me and my dog in my car and her driving the behemoth of a van. I am still in awe of how she managed it, since I drove it exactly once and vowed never again. Once we got to our destination, she realized she had left her coin purse and one of my credit cards at a McDonald's about 200 miles behind us. A phone call later, my friend had convinced one of the gals behind the counter to not only look for the little purse, but to mail my card to me.  Once we reached our destination, I rolled up the door at the back of the truck and things had shifted so badly during the trek across the states that stuff started falling out, including a set of dumbbells.  I instinctively threw myself in front of the tumbling items to try to block their fall, because heaven forbid heavy, bulky, metal things fall onto the street. One of them crashed into my lower leg and I had a bruise the size of a saucer for about a month.

For this recently completed move I hired professionals, but I am not sure they did any better job. The guys who unloaded my stuff acted like they were luggage handlers at the airport, dropping boxes from a couple of feet off the ground. When I expressed concern to one of the men over his dropping a box, he replied "it was heavy". No kidding, that's why I hired professionals, you nitwit. They also were oblivious to the fact that they were stacking heavy boxes on boxes that were damaged and/or collapsing. I was surprised there wasn't a lot of breakage, but if I do one thing well, it's pack.

This move is over for now and it may indeed be my last one.  Just a day ago I unpacked my very last box and for the first time, didn't flatten the empty boxes to save for the next move. I sucked up my courage and recycled the lot of them. That's a big step for me. Maybe the first step on the road to staying put for more than a year. We'll see. 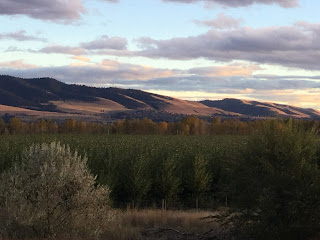 The view from my south facing deck