I'll take the table by the window, please

I spent most of my childhood in the dark. No, that's not a euphemism for anything. I mean the actual dark. I grew up in a mid-century house, the living room/dining room of which had a wall of windows designed to drench the room in Southern California sunshine, but which were in reality completely covered by a wall of drapes...dark brown, floor to ceiling, wall to wall drapes. When we wanted to use the sliding glass door to the patio, we opened the drapes just far enough to clear the door and no further. And we never, ever opened the dining room drapes. To be perfectly honest, I am not sure anyone even knew where the controls for those drapes were. Other windows were similarly covered with curtains, shutters and roll up shades...the kind you pull down on and when released, go zipping up into a roll. Even the door to the side yard had a dark, opaque curtain, fastened at top and bottom of the window that you couldn't have looked out of it you tried, and believe me, I tried. Why, you ask, the urge to upholster the windows? My mother didn't want the sun to fade the furniture. Never mind the fact that none of the furniture was actually near the windows, or that we had a screened-in, covered patio that effectively blocked direct sunlight. Clearly that devilishly clever sun would find a way to bend its rays under the patio roof, homing in with laser like focus to attack the fabric of the couch and chair. And don't even get her started on the way it would, given a chance, completely bleach out the wood of the coffee table, which, by the way, was painted.

When my then husband and I moved our small family back to Southern California after a stint in the Air Force, my parents bought a house about 30 minutes away and sold us my childhood home. One of the very first things we did, before we moved any furniture into the house, was rip those curtains down. We didn't plan on ripping them down, we had thought to open them up, unhook them from their traverse rods, bundle them up and neatly dispose of them. Instead, the minute we touched them, they started shredding, disintegrating in a dense cloud of fabric dust that had us sneezing and blinking to clear our eyes. We moved from room to room, pulling down curtains and thick window shades, removing hardware that hadn't been touched in years. After we had dragged a seemingly entire box of filled black garbage bags to the curb, we went back into the house, enjoying the way the sunshine flowed thru the rooms, spilling across the floors and filling previously dark corners with brightness. We were so delighted by the whole light-flooding-in thing, that we didn't even mind that, in addition to said corners, the sunshine also clearly illuminated the fact that we desperately needed new flooring.

I've had lots of homes since then. There have been high ceilinged, expansive, modern spaces as well as older homes that were long on charm but short on space. I've lived in 2 story houses way too big for me and apartments so small I had to put most of my furniture in storage. But they've all had one thing in common....windows. Lots and lots of windows. They have become the first thing I look for in a space I will occupy for any amount of time. Given a choice I will always choose the table by the window, the desk with a view, the house with a wall of windows that will never, ever see a floor to ceiling, wall to wall curtain. Funny thing, my mom went from the house in the suburbs she sold to me to a big, rambling ranch style home in the foothills of San Dimas that had 4 enormous sliding glass doors along with huge windows in every room. Guess what she did?  Yep. 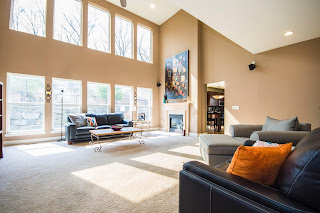 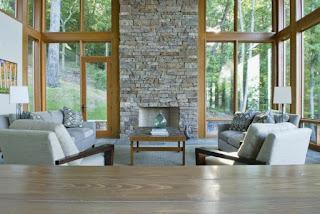 I'd like to claim these as my windows, but sadly they are not!