Harley in the snow

It snowed here a couple of days ago, great big luscious flakes that lined every branch of the bare trees, every link in the fencing, turning my neighborhood into a white iced wonderland. As a rule, we don't get heavy, wet snow but rather a fluffy frosting of snow that can be quite deep, but still dry and airy. It can be frustrating to shovel it off your walk as it oft times blows right out of the shovel.

My daughter's dog, Harley, is a big 100+lb Labrador/Great Dane mix that made the transition from Texas to Montana with ease. My daughter was a little worried about how he would react to the snow, having never been in really cold weather before. I thought perhaps he would take after Cricket, our Springer Spaniel, who at first ran around the yard trying to lick it all up as it fell. Later in her life she decided snow was like poison and hated even touching it with her paws. Anywhere in that range would be great. As it turns out, he loves the snow. After being a dog on a leash, having a big yard to run around in must be a little bit of heaven.

As it snowed I sat at my kitchen window, watching Harley dash out the back door to confront a deer that has jumped over our fence in search of some grass beneath the snow. He loves the deer that wander into his space, lunging out the door in an awkward tangle of legs that are moving too slowly for the rest of his body, eagerly barking Hi! Hi! Hi! The deer turn to watch this silly creature, who they know full well cannot possible catch them, waiting until he gets within a yard of them, then quickly dart away, leading him on a little chase around the yard. Them, sleekly agile, him, a tongue-dangling, galumphing, goof of a dog, running merrily after them. He is so happy, chasing these regal creatures, big doggy smile on his face, yapping Stay! Play! Stay! They leap over the fence in a single, effortless bound as though they weigh nothing, then stop and look back at him as he reaches the fence. He watches closely in hopes they will come back, then sits in the middle of the yard just in case.

It's such a small thing, watching a silly dog and his deer pals, but it always makes me smile. So well done, Harley, well done. 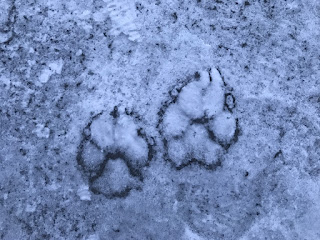 Harley is a little camera shy, but I did capture his footprints in the snow on the patio!