I have rarely taken vacations just for fun.  Living most of my adult life away from most of my family has meant that vacations usually involved packing up the kids and dogs and heading off on road trips to stay with the family I moved away from! When my kids left home, vacations became me hopping on a plane to fly to wherever they were. And while I have loved those visits with family and wouldn't have missed them for the world, I have watched and listened while other friends described cruises, camping expeditions, trips to England, Hawaii, Borneo (ok, not Borneo). I have oohed and aahed over photos and videos, shown on Mac TV and set to music just to rub it in that they HAVE TRAVELLED and I have not.  Yes, I know that wasn't their intention, but still.

Last Spring I was complaining to a friend in Seattle that I never go anywhere, to which she whined "me, either" and before we knew it we were planning a trip to Las Vegas.  We stayed in that wonderful pink paradise, The Flamingo, ate great food, drink a lot of Cosmopolitans and played penny slots.  Bliss.  We found out that, even though we had only met once before in person (we are e-business buddies), we travel pretty well together.  It helps that we are both easy going about travelling. Of course it also might be that we are both so pathetically happy to be going anywhere that we could have stayed in a linen closet and called it a wonderful, relaxing vacation.  The fact that we stayed in a hotel room that had a TV in the bathroom mirror was just frosting on my cupcake. So this Spring when she mentioned she was thinking of visiting friends in Vermont during the Fall and would I like to tag along, I didn't even hesitate.  After a few glitches coordinating her flight from Seattle with my flight from Los Angeles, we were set. For 6 months it was a giddy topic between us, where would we go, what would we do?  We started the count down at about a month, eagerly ticking off the weeks, then days, then hours before the BIG DAY.  I am generally a not-much-for-planning kind of girl, and I was a little worried that we would talk up the trip so much that it couldn't possibly live up to my expectations.  Boy, was I wrong.  BEST. TRIP. EVER. It was my first time in Vermont and exactly the kind of vacation I love....nothing much to do and a bunch of time to do it.  I saw amazing scenery (you don't really have to search that out..it's just kind of there), met some great people, had fabulous wine, did serious shopping and took a bunch of photos.  I didn't wear my watch the entire time and that alone was worth the price of the ticket.

But the most important thing I brought back from VT is not the cheese, the cool Dartmouth sweatshirt or the handcarved wine stopper.  It's the memories. Sitting on a deck drinking craft beer while watching 2 cows and a horse meander lazily down to where they know their dinner is waiting.  Power walking with an amazing lady up and down hilly country roads as she tells me the history of the homes we pass.  Eating breakfast at the airport almost comatose from traveling all night but happy to be anywhere but work. Waking up in a room filled with antiques, snuggled under a down comforter with the windows open for the fresh air. Gathering around the kitchen table of new friends, drinking wine and admiring what they have created out of a sugar house. Eating blue birthday cake  in the shape of big truck, at a birthday party for someones grandchild, having had just enough wine to wonder if our poop will be blue. And spending time with my good friend, Cindy, catching up in person on all the gossip that didn't fit into our many emails.

As it turned out, we were about a week short of prime leaf peeping time. The tremendous colors for which that whole area is so famous were just beginning to make their appearance as we left.  But I didn't care, because this vacation was exactly what a vacation should be. Whether you go to Vermont, Hawaii, Borneo or just around the corner, it's all about making memories.  The kind of memories you hold close and replay over and over.  The kind you sit around a kitchen table and say "remember when we...." And you know the great thing about memories?  You can add to them and add to them and still have plenty of room for plenty more.  And add to them I will.  We are already planning our next trip.  We'll talk about it for 6 months,plan it to death, email back and forth about it and then enjoy the heck out of it when it arrives. 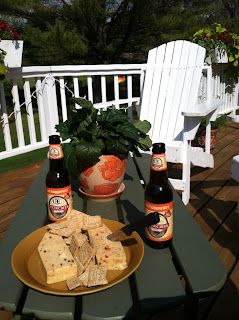