At a family dinner hosted by me last week in my new apartment, my grand niece thought it was great fun to play in my closet. At 3 1/2, a closet full of shoes she had never seen before was irresistible.  I pulled them all off the shelves and left her happily trying on everything from flip flops to my new Supergas. A while later we all laughed when she came dancing into the living room wearing a pair of red heels, then laughed again as she insisted her mom also try them on. "Those are date shoes," someone  remarked.  Hmmm, I thought, yes they are, or I should say, they were supposed to be. I bought them years ago while I was living in Texas. At the time they seemed to me to be the perfect date shoe.  Since I had recently filled out a profile on Match.com, I had bought them with high hopes that I would meet someone for whom I would suffer thru the pain of wearing high heels for the first time in forever. As it turned out most of my dates were not the red shoe type, but much, much more casual. And while none of them were particularly memorable, some of them were pretty funny.

Here, in no particular order, are some of the lowlights of my Adventures in Dating After Fifty.

First there was the guy whose online photos showed an attractive man with dark brown hair and smiling eyes.  As it turned out, he was not only (as his profile stated) over 50, it was entirely possible he was over 80. I met him for lunch at a restaurant about 30 miles from me he said was one of his favorite place.  My thought when I walked into the restaurant was how can this be anyone's favorite? It was a seen-better-days place, remodeled in the 40s. He probably went to prom at the restaurant during its heyday. He spent the entire meal talking about himself and the good old days.  I spent much of it wondering if the coal black hair he sported was just a bad dye job or an equally bad hairpiece.

Then there was a very nice man who turned out to be very unemployed and living in a mobile home he had bought on Ebay for $50. He was hoping to get the toilet working soon. I paid for breakfast. He was followed by a man who said he wasn't depressed about losing his job since it now meant he could volunteer full time at his church, and a man who spent most of the evening talking about the ex wife who bled him dry, while checking his cell phone.  As it turned out he, too, was 'between jobs' but refused my offer to pay half because he didn't think women should have to pay for anything. Since he had ordered a glass of wine for me that he was just sure I would love, my inner snarky self wondered if he also thought women shouldn't vote.

The best of the worst, though, was the guy, who on paper was a great match for me.  He loved football, I love football.  He liked to explore out of the way places, me, too.  He once drove 3 hours to see the sunset, I once drove 3 hours for lunch in Solvang. He was 6' tall, I am 5'8", plenty of room for the red heels. He picked me up in a truck that was the same make and model as mine, albeit a different color. Mine was red, his a sedate gray. My first clue that this was not going to go well, was when he had to move a week's worth of stuff off the passenger seat so that I could occupy it. Bear in mind, this guy just drove 50 miles...wasn't there time during that drive to do a little housekeeping? Then I spotted a change of clothes hanging in the back seat. Probably not going to need those, I thought. He asked me if I had a favorite brunch spot. No, but there was one in town I had always wanted to try.  "We'll try that one some other time", he said and he got on the highway and headed West. 65 miles later we pulled into a little Texas town he claimed was a site to see at Christmas time. We were only 5 months too early. We walked around in the hot dust for about 30 minutes, during which time I found out that he thought art was a waste of money, then ate at the lunch counter in the town's Christmas store. He looked around at the decor and said he just didn't get it. Apparently his ex wife, who no doubt bled him dry, loved Christmas and collected those little Dickens themed buildings. He said when they broke up he thought about lining them all up for target practice.  Check, please! "Hey," he said happily as he paid for our sandwiches, "you're a cheap date." Definitely not going to need that change of clothes. The best part?  I don't know what yardstick by which he measured himself, but common sense told me as a 6 footer, I shouldn't have had to look down to meet his eyes.  After an awkward 65 mile drive back to my house, he pulled into the drive, left the truck running and said "Well, you have my number."  Yes, I thought, I really do.

There were other dates during that summer of the promising red shoes, and other guys I met and talked with on the phone or by email.  But I never once had the inclination to trot out the heels. I could have worn them for a dance I was invited to. But the man my age in the online photo I thought was going to be my date turned out to be his son, and when I mentioned that I didn't know how to ball room dance and really didn't think I wanted to learn, he got downright snippy and said I was narrow minded.

After my grand niece had made her mom try on the red heels, she then thrust them at me.  "Ok," she directed, "now run around."  Only for you, little one, only for you. 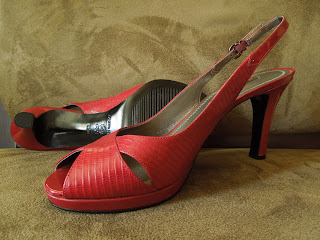