Not the best idea I ever had...Part 1

Last year, while contemplating a move back to the Seattle area to take a full time, in-office job, I spent a month visiting my mom in Southern California.  After being around family for about a week, I was suddenly struck by the idea that I should move not to WA but back to CA!  I grabbed my sister in law and went in search of apartments. Something close, but not too close. A place that would allow me to visit my mom, but not encourage her to drop by every day. I loved the apartment we found and was packed and moved a month later. It had everything I was looking for, a great floorplan, a cozy patio, a huge master bedroom closet and a beautifully landscaped setting just across from Victoria Gardens, one of my favorite shopping destinations. It even had a fenced dog park, which was very important at the time. I loved it so much that I completely ignored the fact that the word "affordable" was not on the list of amenities. Yes, I could cover the monthly rent, but only by doing extensive surgery on my already cut-to-the-bone budget. I spent the first 8 months hosting family get togethers, wine on the patio, holiday buffets, luncheons and birthday parties. It was lovely. Then reality set in. Yes, I was around family and making some new friends, but as my savings dwindled and I found myself turning down invitations to meet for dinner or the movies and struggling to meet my bills, I woke up and realized that, as much as I loved the little apartment, I could not afford it. I did the adult thing, gave 60 days notice, and made plans to move.

A little sad, without a clear destination in mind and therefore not terribly motivated, I dragged my stash of boxes out of the garage and began the slow process of dismantling my apartment. And then, the roof fell in. Well, not really, but kind of. It started with a slow leak in my hallway that rapidly turned into a deluge, not something you expect when you live on the ground floor of a 3 story building. It seems the people in the apartment above me had a portable bidet (who knew that was a thing?), which had to have water constantly running thru it. The hose hooked up to the sink managed to work itself loose and quickly filled the apartment with water. Gravity being what it is, my apartment was next in line.  By the time maintenance got back from lunch and ambled over to investigate (yes, he ambled into my apartment, no doubt expecting the message I had left on his cell phone containing the words "water" "pouring in" and "flooding" was hyperbolic in nature and not factual) water was not only gushing from the hall ceiling, but also trickling out of the electrical outlets and seeping thru the walls.  I had to evacuate immediately.  Management put me up in a lovely hotel with a 2 room suite for 4 days. It was a super nice, business oriented hotel with a full desk, free wi-fi, two huge flat screen TVs, hot breakfast buffet and freshly baked afternoon cookies. If I hadn't been worried about the looming deadline of the moving van arriving at the water logged apartment, I might even have wanted to stay longer.

Four days after I had packed my suitcase and skedaddled, I got the call that the disaster mitigation company had finished its work, the apartment was livable and I could move back in. I bid the hotel adieu and drove right over. Livable is clearly in the eye of the beholder and what my eyes beheld was not even close to livable.  There was no flooring in the entry, kitchen or bathroom, the carpet had been pulled up and the wet pad removed, but only in spots so it was weirdly lumpy. There were exposed beams in some of the ceilings and huge chunks missing from the drywall. All the crown molding was gone as well as the baseboards and about half of the light fixtures were missing. They had unplugged the fridge and pulled it out into the middle of the kitchen (spoiled food anyone?), ditto the oven.  But the best part was that the workers had relocated all of my furniture along with the boxes I had packed to the sides of the rooms, stacking things on top of each other, balancing them like a giant Jenga puzzle.

As I stood in the living room gaping at the 'livable' apartment, I had two thoughts. I can't believe I'm paying money to live here and the movers will be here in 10 days. 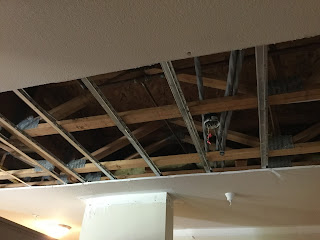 The hallway ceiling.  I expected things to drop on me every time I had to pass under the gaping wound. I tried not to stare too long into the depths, because you know, the Abyss thing.