If you have ever googled anything to do with getting healthy, eating responsibly or losing weight, your results have no doubt included at least one link to Paleo or Whole30 or The Wild Diet and from there maybe more than one link to someone touting the benefits of Bullet Proof Coffee. This odd sounding magical brew is said to help with weight loss, boost immunity and calm inflammation. Loyal drinkers say it satisfies their morning hunger and sets them up to eat 'clean' the rest of the day. I am often skeptical of claims I read on the Internet, since 9 times out of 10 the claimers want to sell you something.  But in this case I actually know two people who have tried it. One was my daughter who told me a couple of years ago that she had made it several times and it was yummy. She didn't think it was for me, though, for a couple of reasons (more about that in a moment). Then a week ago at the Thanksgiving table at my good friends the Oliver's house, I sat next to a guest who said that she had recently made the change to drinking it and claimed that, although this was the only change she made, she had dropped 20 lbs in just a couple of months.  Since there was nothing she could possibly be wanting to sell me, I believed her.

Now, as to why my daughter thought the drink was not for me. I like my coffee hot, very hot, like almost can't drink it hot. Hot chocolate is fine lukewarm, ditto soup or chili. But coffee has to be HOT. I also like my coffee black. No sweetener, no cream, no flavorings, no whip, no froth. No macchiatos, mochas, lattes. My order at Starbucks has always been coffee black no room for cream, please.

So what, you ask, exactly is Bullet Proof Coffee? It starts with organic, single sourced coffee, brewed black (so far, so good), then put into a blender and whipped into a frenzy with a tablespoon of grass fed butter and a similar amount of coconut oil. The end result is a frothy, pale brown brew that looks more like a coffee drink than coffee and is not blazing hot. Nope, doesn't sound like me at all. But losing weight, boosting immunity and calming inflammation are all worthy goals, so this morning instead of my regular two ginormous cups of plain old brewed coffee, I buzzed up a blender of BPC. I gave it a sip and it was...interesting.  I was prepared for the frothiness, prepared for the not quite hot enough temperature.  What I wasn't prepared for was how much it tasted like melted butter. Yes, I know I should have been since I clearly added a tablespoon of Kerrygold to the blender. It wasn't sweet at all, a definite plus, and once I zapped it for 30 seconds or so, it was nice and hot. But it was very, very buttery.

According to those who have tried and love it, to optimize its effectiveness, this has to be the only thing you consume for breakfast and you have to give it a goodly amount of time to work for you. So, I'm thinking a week sounds goodly. I once went 36 hours without sleep when I was 6 months pregnant.  How hard can it be to go a week drinking something that tastes and smells like melted butter?  Check back with me in a week and I'll let you know. 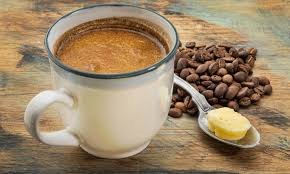